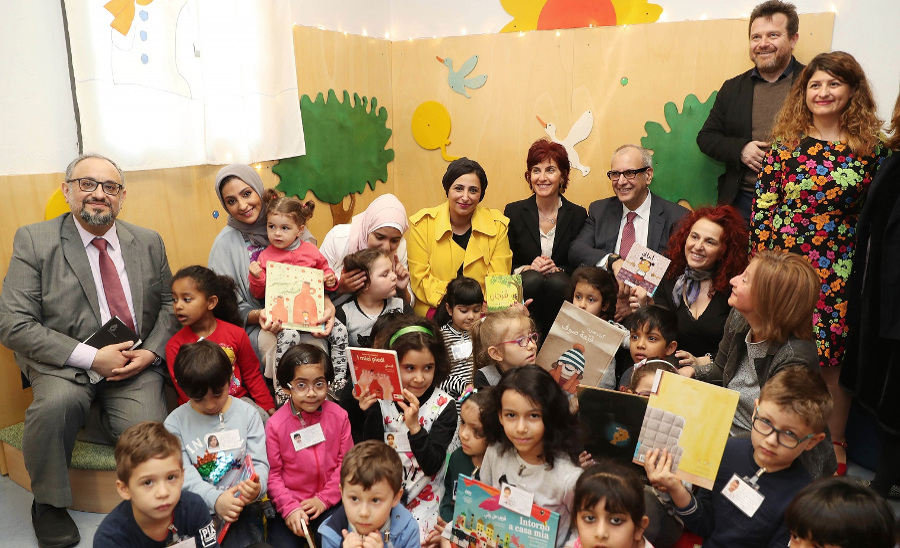 In the presence of Sheikha Bodour bint Sultan Al Qasimi, Vice President of the International Publishers Association (IPA), and Founder and Chairperson of Kalimat Foundation for Children's Empowerment (KF) has distributed 2,000 books to 11 libraries across Italy. The books belong to a mix of genres including literature, culture, and sciences and are targeted mainly at Arab immigrant and Arab refugee children and young adults seeking asylum in Italy.

Sheikha Bodour Al Qasimi, Founder and Chairperson of KF, visited the Kahoula Library in Bologna where she met with representatives from different entities including the Ministry of Education, Italian Board on Books for Young People, Bologna Municipality, and Bologna Children's Book Fair.

The visit was attended by HE Abdullah Hassan Al Shamsi, Consul-General of the United Arab Emirates in Milan; Rana Al Dhaheri, Second Secretary of the UAE Embassy in Rome; Carlo Gallucci, Publisher; and Mohammed Matroushi, a library donor.

KF’s first book distribution initiative of 1,100 books was held in cooperation with the Italian Board on Books for Young People, comprising 90 Arabic and 10 Italian–Arabic titles. These books have been published by the Gallucci-Kalimat publishing house, which was formed after Gallucci Publishing and Kalimat Group signed a partnership to establish this joint publishing house at the Rome Book Fair 2018.

Kalimat Foundation distributed 900 more books during its participation at the Bologna Book Fair 2019, raising the total tally of donated books to 2,000. The move aims to support Arab immigrants, refugee children and young adults to instil a reading habit in their native tongue, learn more about their culture and heritage, and offer them a stronger sense of identity and belonging in an environment that may make them feel distant or uprooted.

Highlighting Kalimat Foundation’s successful efforts in bringing children and books together irrespective of their circumstances in yet another country, Amna Al Mazmi, Kalimat Foundation’s Manager, noted that the distributed books in Italy were carefully selected to promote both the readership’s literary knowledge and their academic expertise.

“Kalimat Foundation decided to distribute those books in Italy because it hosts a large number of young Arab refugees, who do not have access to Arabic language books. The initiative aligns with the foundation’s firm belief in children’s right to education and learning through books,” she added.

According to a study by the Ministry of Education in Italy, one out of every six students of foreign decent come from an Arab background, which makes them the majority of the non-Italian students in Italy's schools.

Since its inception in April 2016, Kalimat Foundation has been engaged in an extensive programme of launching and implementing initiatives that facilitate the provision of public libraries and refugee camps with books. It seeks to give children in disadvantaged areas access to sources of knowledge, in keeping with its dedication to ensuring every child’s right to read. KF believes in the positive impact of books on creating a future knowledge-based Arab generation that has a broad understanding of its own and of global cultures.